The ribbon cutting event for the new Johnson Controls classroom at Lincoln Tech’s Marietta, GA campus on October 16 was just the latest collaboration between the two companies.  For the past 18 months, graduates from the HVAC and Electrical/Electronics training programs at Lincoln Tech have had the opportunity to pursue rewarding careers at industry leader, Johnson Controls. Scott Shaw, CEO and President at Lincoln Tech, puts it this way, “We are bringing industry and education together. Johnson Controls is a fabulous organization. Our students who have graduated and gone on to Johnson Controls are very excited. They’re getting additional training, and they feel like they’re adding value by serving Johnson Controls in a meaningful and productive way.”

This exciting partnership has led to over 60 Lincoln Tech graduates now employed by Johnson Controls branches throughout the country. John Hayes, Director of Human Services, Johnson Controls, recalls, “Initially we started out hoping to build a pipeline of talent for the future. As we built our relationship with Lincoln Tech, we saw the opportunity for “right now” hires. So now we’re looking for both!”

William Maurello, Area General Manager, Johnson Controls agrees, “Working with Lincoln Tech, we can develop the types of skills sets we need to bring these people in ‘ready to go’ right at the time they start with us. And, with that, we have opportunities to grow and plenty of career choices they can make, so it’s an entry point to something that can become much greater for them in the future.” 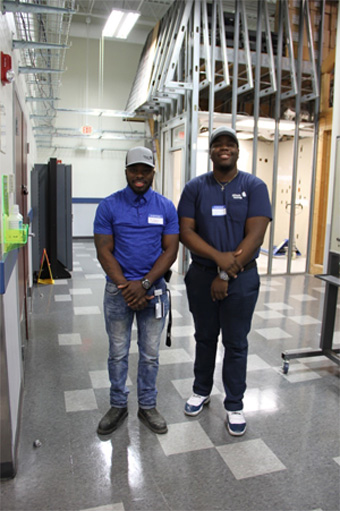 The enthusiasm for the partnership runs both ways. At the Marietta campus’s recent ribbon cutting, two Lincoln Tech graduates were part of the celebration (they were actually holding the ends of the ribbon) and shared their unique story with those who attended.  Tremyd Burton and Vashaade Brinson met back in high school. Vashaade needed a place to stay for a while, and wound up at Tremyd’s house. They’ve been inseparable ever since. They played football together after school, and wound up getting jobs together at a local Walmart while in school.

Tremyd’s friend was training at Lincoln’s Marietta campus. She urged Tremyd to check out Lincoln’s HVAC program. Tremyd toured the campus, and after seeing the Smart House used for hands-on training, he was sold. Vashaade was quick to follow Tremyd to Lincoln, but he chose the Electronics and Electrical Systems Technology (EEST) program. Both men kept their jobs at Walmart during their time at Lincoln. “I was going to Lincoln from 8 - 2, then heading over to Walmart from 3-11,” recalls Vashaade. “It was a big sacrifice, but I knew it would pay off in the end.”

While at Lincoln Tech both Tremyd and Vashaade knew their grades and attendance mattered. Tremyd remembers, “We were told that future employers look at your attendance record. If you don’t show up for school, they might think you won’t show up for work either.” During a Career Fair on campus, Tremyd and Vashaade became aware of Johnson Controls. Tremyd had always been fascinated with commercial refrigeration, and wanted to know more about what “happens behind the scenes,” but Vashaade got hired at Johnson Controls first.  “I got the call about a job offer when I was sitting in my car,” explains Vashaade. “I’ll never forget it.”

Tremyd was patient. “I had both Coca-Cola and McKenney’s interested in me, but I knew I wanted to go to Johnson Controls with Vashaade.” About a week after Vashaade was hired, one of Johnson Control’s Hiring Managers asked him about Tremyd. And that sealed the deal.

Although Tremyd and Vashaade work in different capacities at Johnson Controls, they’ve helped each other on job sites, and they’re still roommates.  Their easy manner with each other and shared history was very apparent at the Q & A session they moderated just before the ribbon cutting ceremony. About 40 HVAC and EEST students were inspired by their past, present and future.